Deogarh District at a glance

Deogarh district was newly created on 1.1.1994 being bifurcated from Sambalpur District. It is a relatively backward district domicile by both tribal and non-tribal people in almost equal proportion. As it is an industry less, district the people solely depends upon Agriculture for their livelihood.Though a large section of its population is educated and it is adequately filled with land and forest resources, the obvious lack of sufficient social and physical infrastructure makes it a backward district with 79%% of its rural population below poverty line(BPL)and 29% under very poor (with annual income < Rs.4000) category.

Among various biodiversity rich and ecologically balanced locations,”Pradhanpat” and “Kurudkut” waterfalls are with historical importance and with a salubrious atmosphere around them.Kurudkut is one of the earliest locations where hydroelectricity was generated in Asia.

Deogarh Town is 90 km to the east of Sambalpur Town on N.H.-6. National Highway No.6 passes through the district acts as the main artery of inter-regional trade and other links. 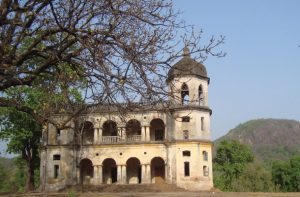 Bamanda–the citadel of creative artists dates back to 5th century A.D. when Mathara Royal Family was at the helm of the Administration. After this dynasty, Ganga Rulers came into power and established their capital at Deogarh. Deogarh attained all-round prosperity during the reign of Raja Basudev Sudhal Dev, the most enlightened rulers of this clan.A new horizon was innovated in the field of communication by the foundation of Jagannath Ballav press in 1886 and publication of a weekly magazine the “Sambalpur Hitaishini” in 1889. It was during his rule that the jail, police station, post offices, Dispensaries were established and irrigation system was introduced. He had a telephone line of 78 Miles connecting Bamara and Barkote in 1900 was the longest in India during that period. Bamanda’s own postal system was very developed. It got affiliated to the British Postal system in 1895. Sir Sudhal Dev, the then King of Bamanda had coined and issued postage stamps in his own Kingdom. He had promulgated paper currency also in his state 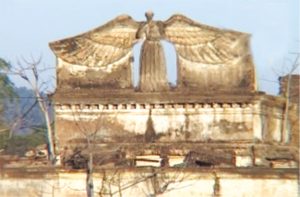 This District is entirely of hilly tract. The Hill system of Deogarh has been categorized mainly under four ranges such as
The Khajuria Range on the north running from West-East in Badbar-Pragana of Deogarh Police Station having a maximum height of 745 Metres. The Pradhanpat & Kaidanta Ranges having maximum height of 743 Metres and 816 Metres on the North.
The Pawri Range on the eastern side of the River Brahmani which is 678 Metres in height.
The Ushakothi Range in Kansar & Reamal Police Stations. The hill ranges have elevation ranging from 610 Metres to 762 Metres from the mean Sea Levels. 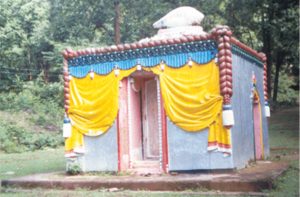 Deogarh district of Orissa is situated in the Western region of the state and is located between 21° 31′ 53″ N Latitude and 84° 43′ 2″ E Longitude. It is situated under North Western Plateau agroclimatic zone of Odisha. The climate is mainly hot and moist sub humid.The mean annual rainfall of the district is 1582mm. The mean max temp of the district during summer is 38 C and minimum winter temperature is 15 C. The district comprises of different types of soil i.e. Red, Brown forest, Red & Yellow, Mixed Red & Black. The entire district is covered by only one agro ecological situation i.e low rainfall lateritic soil.

Air: – The nearest airports for visiting places of interest in Deogarh District are at Bhubaneswar (280 km) and Raipur (376 km).

Rail: – The nearest rail heads for Deogarh are at Sambalpur (90 km), Bamra on the Nagpur-Howrah Section of South Eastern Railway (103 km), Jharsuguda (98 km) and Rourkela (115 km)