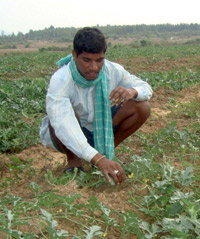 Bishnu Prasad Biswal is a young farmer of 30 years of Suguda village of Deogarh District. He was sitting idle in home after the Kharif season as he was utilising all his 5 acres of land in monocroping. His interest and enthusiasm brought him to the corridors of KVK where he got the knowledge to utilise the barren land in watermelon cultivation fetching water from the nearby stream. He availed the benefits of FLD programme of KVK and got the knowledge of hybrid watermelon cultivation, starting from acid soil management to seed treatment, variety selection, INM and IPM schedules. He has harvested 500 qtl of watermelon last year from the same land. His net earnings from the barren land is now Rs.62,500/-

The watermelon of Mr.Biswal is now attraction of the markets of Jamshedpur, Kanpur, Kolkata, Gorakhpur, Cuttack and Kathmandu like cities and traders named his produce as ‘Suguda Sugar’. He is now encouraging his co-farmers to go for scientific watermelon cultivation for better profit. Hon’bleAgrl. Minister of Odisha has felicitated him as the best farmer during the 48th OUAT Foundation Day. 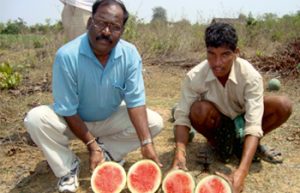 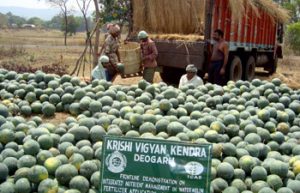