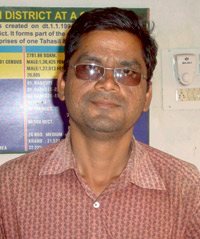 Sri Purnananda Pani, vill-Kandhal, Block – Barkote is a mechanical engineer by profession. After completion of engineering graduation he got an employment in a company. But his mind was not in the job and he wants to become owner of his own. He has 20 acres of parental property. Suddenly he decided to cultivate his land in scientific way for more profit because his land was not cultivated due to scarcity of labour. So to become the owner of his own he left the company job and installed a mill in his own village and converted all his produced grain to rice and got make profit than the raw paddy. Then he converted 5 acres of his upland to Mango and Litchi orchard. Initially he has not got more profit from the orchard due to lack of cultivation practices. But after the suggestion of agricultural officials he installed drip irrigation system in his orchard and save labour cost towards irrigation alongwith adopted improved management practices and earned about Rs.2,00,000/- per year from the orchard. He cultivated paddy per year from the orchard. He cultivated paddy in scientific way in his rest 15 acres of land. Due to scarcity of labour he has purchased a power tiller and an axial flow thresher. He used these implements in his own land as well as earned Rs.1,00,000/- per year through custom hiring. Now he has transplanted paddy by rice transplanter and adopted SRI method of rice cultivation under KVK guidance. He is earning Rs.2,00,000/- per year from paddy cultivation after adopting new technology. After seeing the performance of paddy transplanter he has planned to purchase a tranplanter. So totally he has earned about Rs.5,00,000 per year and become the owner of his own as well as become the example of the jobless students for self-employment 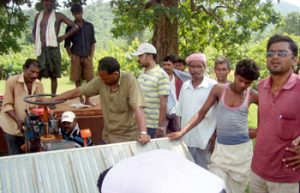 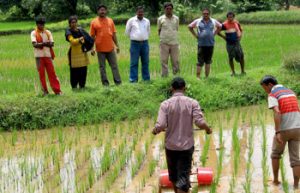